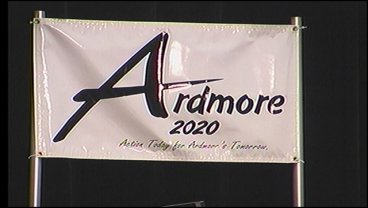 Thursday, developers of the "multi billion dollar resort plan" on Lake Texoma met with community members, who make up what's called a "tax increment district review committee." Their job: decide if Marshall County should be part of a "tif" district -- an incentive that some communities use to lure in big business. While the committee didn't take any action today -- one big thing did come out of the meeting. Pointe Vista developers say the total tax potential over 25 years is more than $531 million.

A lot of money in the long run, but they also say they need that "tif" district to make the resort a reality, faster. So the question is, what exactly is a TIFD? KTEN's Jhen Kordela did some research. She has how it's worked for Ardmore.

Economic leaders in ardmore say they've seen good things out of the tif district. The problem is, there's a lot of jargon surrounding the term. To put it in plain english, it's tax dollars paid by a new business. But, instead of those dollars going directly to the state, they go right back into a fund for the business to build roads, utility lines and basic infrastructure. Thursday night, at Ardmore's final vision 2020 meeting, they credited the tif for recent growth.

Making their hometown a better place to live. That's the goal of Ardmore's 2020 community vision series, wrapping up the last meeting inside one of the big accomplishments from past think-ahead events: the Ardmore Convention Center.

In a growing city, one of the latest developments to sprout up: the Ardmore Commons. With parts of it still under construction, this idea became reality through a TIFD -- a tax increment finance district.

"It takes a district, and money from that tax revenue gets dedicated to the approved projects within that district," says Wes Stucky, president of the Ardmore Development Authority.

The site essentially pays for its own improvements through the property tax and a portion of the sales tax generated from shoppers.

A TIFD also paved the way for East Jordon Iron Works. Its property tax goes toward rail, street and utilities at the ardmore airpark. That brought in two new businesses: Carbonics and Online Packaging -- according to Ardmore city leaders, more proof of incentives that turn into economic growth.

But Stucky says, he understands why some would question using tax dollars for private industry.

Pointe Vista developers say they would use the TIFD to expand roads in and around the proposed resort, including a complete revamp of the Roosevelt bridge to make it more attractive to tourists. They're planning a new sewage treatment plant, water lines, even the possibility of the resort having it's own emergency services, like fire and ambulance services.

But, like we said, no decision has been made yet. The TIFD review committee will meet again next month, and the issue will eventually be in the hands of Marshall County commissioners.