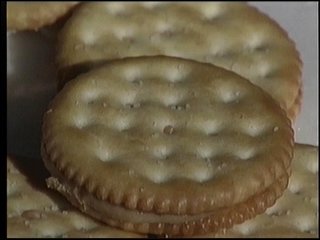 In Behind the Kitchen Door this week, an update on the massive peanut product recall.

The U.S. Food and Drug Administration says any products made at the tainted plant during the past two years may contain salmonella.

Now, state and federal leaders are calling for criminal charges against the company.

In an unprecedented move, the FDA is recalling everything that's been produced at the peanut corporation of American plant in Blakey, Georgia since January 2007, saying anything made could be tainted with salmonella.

The recall includes ice cream, cookies, energy bars, dog biscuits and even large tubes of peanut paste that is distributed to schools, hospitals and nursing homes.

New details released show inspectors found numerous violations inside the plant: mold, holes in the ceiling, and roaches... and more, as well as contamination with several strains of salmonella.

According to federal officials, at least 12 different times managers at the plant shipped peanut products even after their test came back showing they contained salmonella.

Instead of tossing the item, they re-tested it and when it came back with a positive result - it was shipped out, a process health officials say is deceiving.

One investigator pointed out that those large tubs of peanut paste could yield both positive and negative results, seeing as salmonella could hide in a small pocket, and that any product that received a negative result should have been discarded.

One representative who oversees FDA funding said the company's actions can, "Only be described as reprehensible and criminal. This behavior represents the worst of our current food safety regulatory system."

Right now, the FDA says any criminal charges would be pre-mature while their investigation continues.

So far, the tainted products has been linked to 500 people getting sick and eight  may have died from a salmonella infection, but investigators say the jar of peanut butter you buy at the grocery store is safe.

For Behind the Kitchen Door, Katy Blakey, KTEN News.