A New Chapter for Denison Library? 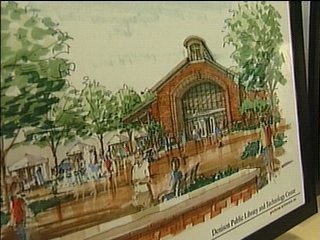 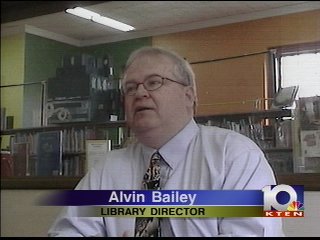 In this era of technology is a library still important to a community?
It's a question the Denison City Council may put before voters.
"The library as a community center, a place where people can come and meet and greet and gather as well as a place where people can find information, is certainly what our deal is," says Alvin Bailey.  Bailey is the Director of Library and Information Technology for Denison and he's spreading the word that the town needs a new library.

Water stains spot the ceiling.  Look around and you can find cracks in the walls.  The carpet is stained and buckling in places.  The Denison Public Library is old and showing its age.  It was built in the late 1940's, shortly after World War Two.   Bailey nods, "It's in need of some repairs."

Bailey continues, "We think that Denison is on the verge of a pretty substantial amount of growth and actually our building for a community our size is a little small."

Library visitor Troy Mask hopes a new library will fulfill even more of his needs.  "Have movies and music that I need.  Access to entertainment, information, newspapers, any magazines that I need."

But his son, Treylan, is all about the technology. "So I can get on the Internet and watch videos about video games."

Bailey says the new library will need more computers. "Coming in on a weekend or the evenings, you'll find that all the computers are in use.   So if we're going to expand any of those kinds of services, we're going to need some more space."

So he'll tell anyone who will listen, like at public presentations, to imagine a new chapter for the Denison Library.  To imagine a new building 25-30,000 square feet, built at the site of the old Denison High School.   He says, "I think the library is always going to be a place where people gather and exchange ideas and get information."

The price tag for the Library and Technology Center is between $7 and 10 million.
Bailey believes half of the money should come from private donations and the rest through a bond put before voters.
The Denison City Council hasn't decided to put the issue before voters yet.
That should happen in August and it could be on the ballot in November.