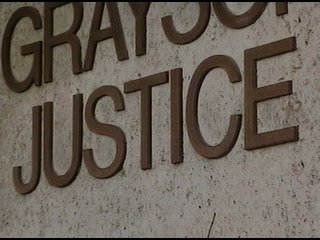 An expert witness, who has testified in hundreds of sexual assault cases in courtrooms across the area, is now banned by two local district attorneys from testifying in new cases. This all happened because a local defense attorney discovered she lied -- under oath -- that she was certified by the Texas Attorney General's Office in her specialty.

As Randy Garsee's investigation shows, there is another question concerning the testimony of Carolyn Ridling. Did she put innocent people behind bars?

"I'm sure there are," Bailey said.

Grayson County District Attorney Joe Brown said, "It's serious, and we want the public to be confident in the witnesses we put up there."

"But, I was still concerned about the inaccuracies that she testified to," said Glaser.

First, let's answer the question: What is S.A.N.E.?

When a child is sexually assaulted, they are often sent to a S.A.N.E. nurse for a forensic interview and examination.

As Brown explained, "She's trained to look for the physical signs of abuse, to interview a child as appropriate to get the medical history and, ultimately, to keep records and participate in the legal process."

In question is the testimony of Carolyn Ridling. She is employed as a sexual assault nurse examiner at Texoma Medical Center in Denison.

"She's testified in several hundred cases in nine different counties that border the Red River," said Bailey. "And, there's probably several hundred of those people who are in prison because of her testimony, and it was false."

Bailey said in this testimony in Fannin County last year, Ridling perjured herself by claiming she was certified as a S.A.N.E. nurse by the Attorney General of Texas.

The transcript shows that he asked Ridling, "So you -- you're certified by the attorney general?"

But, Bailey acquired this affidavit from the attorney general that said otherwise: "Upon review of our records, I show that Carolyn Ridling's S.A.N.E. Certification expired as of April 18th, 2004.

"They shouldn't be bringing in what's, in effect, a charlatan, into the courtroom to testify for the state of Texas to things that are not true," Bailey said.

The district attorneys of Grayson and Fannin counties responded.

Grayson County DA Joe Brown sent out this memo to local defense attorneys: It read, "Our investigation reveals that Ms. Ridling has not been certified as a S.A.N.E. nurse examiner since April of 2004."

Brown added, "I feel the credibility issue is such that we've asked that she not perform new examinations on children."

"And we're going back and looking at the cases she's testified to," said Glaser. "Some of those were appealed. Some of them, maybe not. I just don't know at this point. But we'll look because we want to be fair."

But, that is not the end of Ridling's testifying in sex crime cases.

As Brown explained, "She'll continue to have to testify as a fact witness on the cases she's already heard."

He added, "I don't like it either. I didn't like it on that one occasion. This is one occasion over hundreds, and it has affected her credibility in the future. She's going to take black eyes."

Fannin County DA Richard Glaser is conducting an inquiry and has not ruled out a grand jury investigation into Ridling's testimony.

"You know, I know that defendants are entitled to a fair trial." he said. "And, I think that's extremely important we see that they do get a fair trial, but let's not forget about the victims in these cases. I mean these are terrible, terrible cases."

But Bailey contends every case Ridling's testified in, which is in the hundreds, should be reviewed.

"And, I think the people in the nine counties should realize that if they have a relative that was put in jail based on testimony of Ms. Ridling," he said, "they should at least look at the transcript and her reports to see if she was lying in those."

Brown adds: "If we totally throw her testimony out, it affects children and abuse against children."

From her 12 years of work at Texoma Medical Center, to her expert testimony, some might say Ridling's testimony has helped to remove hundreds of sexual deviants off our streets, regardless of her certification.

But Bailey, who's also an intelligence officer in the Navy Reserve, cites history.

"Well, that's what the Nazis said in World War II," Bailey said. "But, certainly in hind sight, there was innocent people that went to the gas chamber. And, with Carolyn Ridling's testimony, there's innocent people going to prison. And, it's my job to stand in the way of such people."

KTEN made numerous attempts to contact Carolyn Ridling for this report, but received no reply from her.

A spokesperson for Texoma Medical Center tells KTEN, Ridling has been removed from TMC's S.A.N.E. Program, but is still employed at the hospital.

For now, he said he's received no replies or questions from any of them.