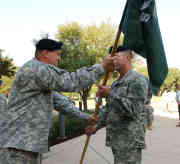 "This is a great move forward in rebalancing the structure of the Texas Army National Guard," said General Furlow. "We'll be able to provide a full spectrum of capabilities and demonstrate what the Texas Military Forces have to offer."

The need for a special operations unit arose because of the continuing transformation of the Texas Army National Guard. Additionally, there were several Green Berets residing in Texas who were drilling with Special Forces units in other states.

"This is a great opportunity for Texas," said the commander of Charlie Company, not identified by name for security reasons. "We've had several Soldiers from Texas that have gone to Mississippi, Colorado and Utah, and now they'll have the opportunity to drill right here in Texas to represent our state."

Like any newly formed unit, Charlie Company will continue to focus its efforts on recruiting qualified Special Forces Soldiers and non-qualified candidates to the unit. The unit has assessment tryouts every month for Soldiers and Airmen who are willing to take the first step in earning the coveted Green Beret.

"Current Guardsmen can interview with us," said the commander of Charlie Company. "We'll do an assessment at a drill and send them off to selection [Special Forces Assessment and Selection]. If they're not quite ready after the assessment, we'll invite the candidate to come back in a couple of months or whenever he's ready."

Interested civilians are also welcome to take the challenge. They can walk in off the street and sign up for the "18 X-ray" option that will give them a direct pipeline to the elite forces. After successful completion of all phases, the Soldier can proudly don the Green Beret and begin the Special Forces adventure.

Once Charlie Company is fully manned and operational, the unit will be expected to conduct worldwide missions in support of the U.S. Army Special Operations Command and the governor of Texas. Special operations warriors in Charlie Company said they are ready.

Anyone interested in becoming member of the Special Forces may call (512) 782-5949 or e-mail ngtx-sf@tx.ngb.army.mil.