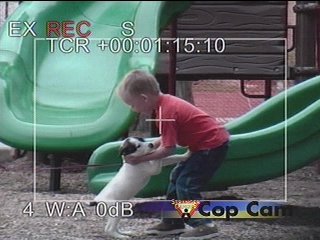 We begin our Stranger Danger series in Ardmore, where a day at the park turned  to into a scary situation for one grandmother.

Under the supervision of members of the Ardmore Police Department, our photographer, Dave Potter, posed as a stranger and talked with children at Central Park in Ardmore.

Watch as our stranger, KTEN News photographer Dave Potter, strolls near the playground with a puppy. Within minutes, 3-year-old Shawn Barber is ready to play.

"This young man obviously thinks this puppy is neat, and playing with the dog and seeing the dog...certainly we want our children to be friendly and not afraid of strangers so much, but they don't need to be engaging in contact and conversations with strangers," said Cpl. Ryan Hunnicutt of the Ardmore Police Department.

Corporal Hunnicutt watched from his unmarked patrol car and narrated for us using an undercover camera.

"This is the situation where the parents would come over and introduce themselves," Hunnicutt said.

"Now things have started to change a little bit, we've gone from your child is going up and engaging the man and his dog in conversation to a situation where the stranger and the dog are leading your child somewhere."

Just minutes after introducing himself, our stranger is on the way to a van with 3-year-old Shawn.

"This would be something that would be very concerning to a parent.   This child keeps looking back for approval but it's not slowing him down any.   He is still willing to go over to the van..this would be considered very, risky..very dangerous," Hunnicutt said.

What happens next is even more dangerous.

"And he's opening the door, he's got the kid right into the car. This would be very easy at this point for a potential predator to kidnap your child and you wouldn't even know it."

Before Dave headed toward the playground, we talked with Shawn's grandmother, and she agreed to participate.   However, she says she was still startled when her grandson climbed into the van.

"It hurt me to see this one getting into the van..I wanted to grab him, but he's still little and we are still in training," said Joyce Turner.

His older brother, Ethan, is 6-years-old, and he did not go with our stranger.

"They told us at school if someone comes up here and says I lost my dog or something, they say hop in...if you get in the car they're just going to take off with you.   That's why I never talk to strangers," Ethan Barber said.

Another child who refused to go with Dave was 5-year-old Adam Sabangan. His mother says she's relieved her son did not go, but she was able to watch as Shawn climbed inside.

"When that little boy got into the car my heart just sank, I couldn't believe it," Gratiela Sabangan said. "So the lesson for me is that even if you do tell them, because the grandma has of course talked to them about it, you still do need to watch them and protect them at their little age"

Corporal Hunnicutt says the best way to prevent your child from being abducted..is to be involved... Talking to them about strangers is not enough.

"What you want to watch for is when the stranger starts to dictate the behavior of the child, leading them somewhere, overly engaging them in conversation.   That's when it's time to come over and talk to your kid, talk to stranger, introduce yourself and prevent any type of problem," Hunnicutt said.

Here are some other tips: