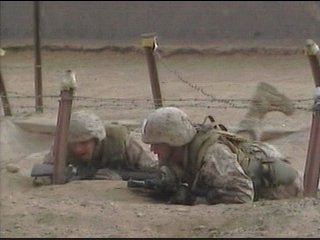 You may have noticed, Meghan McDermott has been out of the newsroom a lot lately. That's because she recently traveled to San Diego, Calif. to see first-hand what it takes to become a member of America's elite fighting force- the Marine Corps.  KTEN's Meghan McDermott reports.

I wasn't alone on my trip.  I traveled with a great group of local educators-- from U.S. History teachers to guidance counselors-- for one week they were the students. Their teachers: Marines. Their classroom: the Marine Corps Recruit Depot- San Diego.

With just five days to learn everything there is to know about boot camp, they got right to work learning formations. To properly "welcome" the educators, it was time for the Yellow Footprints (nats).

Over the following days, the educators saw all facets of training: from combat martial arts training-- to recruits' daily routine-- and even studied Marine Corps history and customs... and the disciplined teaching techniques of drill instructors.

At Camp Pendleton the educators got hands-on with the simulated M-16 rifle, saw the Amphibious Assault Vehicles in action, and looked-on as recruits went through portions of the Crucible-- part of which included a live, simulated combat course (nats).

Shelley Ebert, former junior/ senior counselor, Broken Bow High School, Broken Bow, OK:
"I'm amazed. I had always heard that it was difficult and it was hard.   Now I know exactly what they mean when they say the Few, the Proud, the Marines."

The educators were able to experience a recruit becoming a Marine at their emblem ceremony.

Stephen Smallwood, 11th grade english teacher, North Lamar High School, Paris, TX:
"I just have felt an intense pride in observing what has gone on.   And never before have I ever seen how much education plays an important part in what it takes to become a Marine. The intense ability to read, to write, to think outside the box, that those of us in the public education sector try to teach our students, are totally utilized here."

After a week filled with everything from the Yellow Footprints-- to the Crucible-- and the Emblem Ceremony, the time came to experience a Graduation Ceremony.

The appreciation for what these young men had endured, and for what they have become, begins to sink in for the educators as the former recruits march across the parade deck to begin their lives as United States Marines.