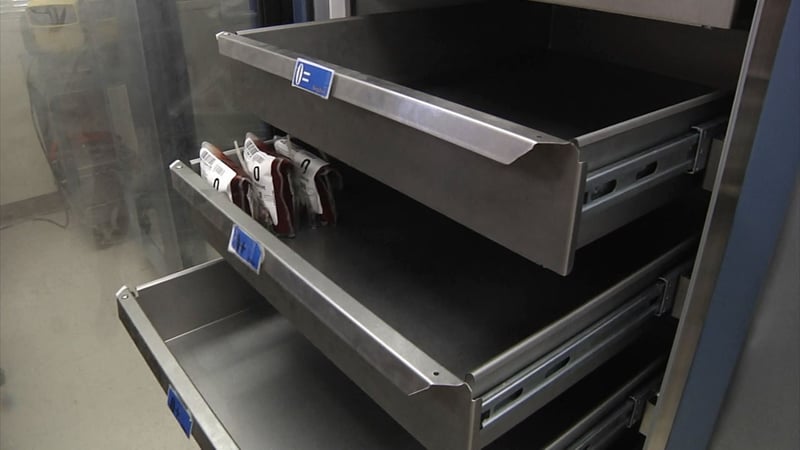 The drawers are empty at Texoma Regional Blood Center. (KTEN)

Staffers say January typically brings a drop in donations, but supplies haven't been this low in 15 years. The shelves are either empty or only contain a couple of units.

As of Wednesday morning, center needed 167 pints of blood to be considered at a safe level.

"As you can see, these shelves are empty," said spokeswoman Melanie Robertson. "In order for this to be considered a safe supply, there would be at least one or two rows of blood."

And that's of each type… A negative, B positive, A-B positive… you name it, they don't have it.

"The donations aren't coming in, and the usage has increased," Robertson said. "A national issue, really, and usually if we are critical and are in desperate need of blood, we are able to import it from other blood centers, and at this point, all other blood centers are just as low as we are. We can't even import what's needed, so it's going to have to come from our community."

At this point, Texoma Regional Blood Center is counting on regular donors like Tommy Caras.

Texoma Regional Blood Center provides the life-giving fluid for five local hospitals, and hardly ever exports it to other communities.

"Saving a life, helping somebody out, people need it," he said.

Types O and A-B male plasma are the most critical needs right now because they're universal.

Find out how you can help by donating at a blood drive in your community, or call 903-893-4314 for more information.