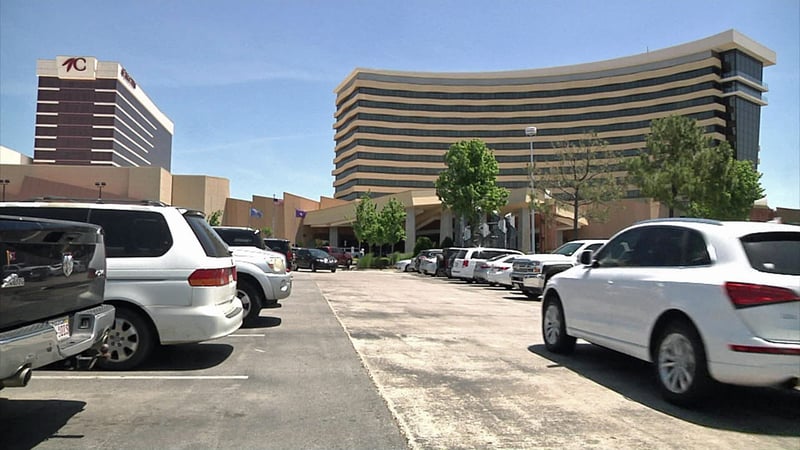 The Choctaw Casino and Resort in Durant. (KTEN)

OKLAHOMA CITY (AP) — Three of the most powerful Indian tribes in Oklahoma are suing the governor over agreements that allow gambling at tribal casinos.

The Cherokee, Chickasaw and Choctaw nations filed the complaint Tuesday in federal court in Oklahoma City.

The tribes are asking a federal judge to decide whether the state's gaming compacts with the tribes expire on Jan. 1. Stitt has said the compacts expire and that he believes gambling at tribal casinos will be illegal on Jan. 1.

The tribes say the compacts automatically renew on Jan. 1 for another 15-year term.

We have a solemn duty to protect the sovereign rights of our Tribal Nations as well as the interests of our citizens. While we prefer negotiation to litigation, the Federal court is now the only reasonable alternative to bring legal certainty to this issue. We remain hopeful we will continue to have a productive and mutually beneficial relationship with the State of Oklahoma once we have resolved this issue.

The Governor’s stance on the gaming compact has created uncertainty and has been seen as a threat to our employees and our business partners. We see this legal action as the most viable option to restore the clarity and stability the Tribes and Oklahoma both deserve by obtaining a resolution that our compact does automatically renew. As elected leaders, it is our responsibility to uphold the compact, honor the will of the Oklahomans who approved State Question 712 and the Federal law that defines our relationship with the State on these matters

Gov. Stitt replied to the lawsuit in a tweet:

This lawsuit is a capstone action to the numerous refusals to ensure a win-win for all parties by the end of the year. I will continue to be laser focused on an outcome that achieves a fair deal & is in the best interest of the State & its citizens. https://t.co/y11ri63VnM pic.twitter.com/NyGVYvaNkV

Earlier on Tuesday, Stitt announced that the State of Oklahoma has agreed to a one-year extension with the Choctaw and Cherokee nations on  hunting and fishing compacts that were set to expire at midnight.