'There was just no more money' for Pauls Valley hospital - KTEN.com - Texoma news, weather and sports

'There was just no more money' for Pauls Valley hospital 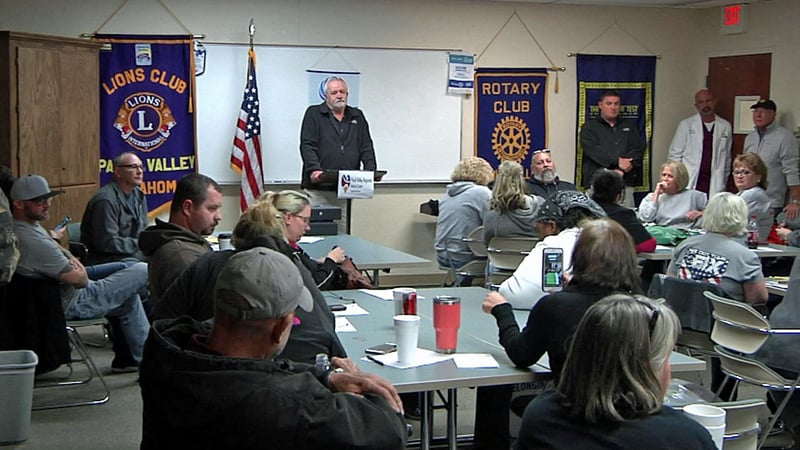 Pauls Valley hospital employees and citizens had questions for city leaders at a meeting on October 15, 2018. (KTEN) Pauls Valley Regional Medical Center was shut down without warning on Friday evening.

At a sometimes contentious meeting on Monday, hospital staffers wanted to know when they will be paid.

And one patient may have died because the community's facility was no longer available.

"They were not able to raise EMS, and they had to go to Purcell," said  Alliance Health Partners CEO Frank Avignone, whose company managed the Pauls Valley hospital in its final weeks. "By the time they did get to Purcell hospital, the patient had unfortunately expired."

Melody Williams worked at the Pauls Valley hospital for close to 30 years. Now she is dealing with an aggressive form of cancer.

Not only does she have to travel to Oklahoma City for treatment, but also she can't afford the insurance without a paycheck.

"Just about 10 days before my mastectomy, I found out that I no longer had any insurance," Williams said.

Her case isn't an uncommon one. Avignone said most of his former staff is struggling.

Why was it necessary for the hospital to shut down? Pauls Valley City Manager James Frizell said the city simply ran out of time.

"There was just no more money, I mean all the money," he said. "I mean, there was nothing left to keep it open."

Frizell said there is an ambulance service available in case of emergency.

"The ambulances will transport them to wherever they need to go, whether that's Ada, Ardmore, Purcell or even the tribal hospital," he said.

Avignone said donations are being accepted to help pay employees while the issue is being sorted out. He said he will be at the hospital for the next couple of days.

The hospital opened in 1970 and narrowly avoided closure last month, when officials said they had received enough funding to pay overdue health benefits and the salaries of 130 employees. The hospital declared bankruptcy in March 2013.

Pauls Valley is a community of about 6,000 people about 53 miles south of Oklahoma City.

The Associated Press contributed to this report.