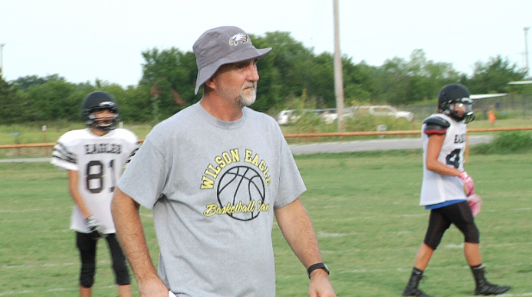 WILSON, OK - For the second straight year the Wilson Eagles come into the season going through a major change.

"My first impressions of coach are that he is a hard working man and he wants to get things going and he wants to make Wilson Eagles football great again," said Wilson senior fullback Trevor Schaaf.

"He is a great guy. He works hard. I think he is going to do great for us this year," said Wilson junior tight end Carson Fulton.

"He is an outstanding leader. He makes us want to be better and we have big expectations for this year," said Wilson junior quarterback Logan Schaaf.

As you can hear the Eagles are fired up about their new head coach Kenny Ridley, who can not wait to start this new chapter for himself as well as Wilson football.

"These Wilson kids are fantastic. They have accepted us with open arms. Coach Howard and I are both new to the program and they have been very receptive to coaching and the hard work and work ethic have been great so far," said Wilson head coach Kenny Ridley.

The coaching change comes just one year after Wilson switched from 11-man to 8-man football and Coach Ridley will be learning this style right along with his players.

"As far as the schemes go it is really a different game. You lose three players on each side of the ball and defensively you are really fighting an uphill battle," said Coach Ridley.

"There are less people out there and you get to run around and you just kind of get to go," said Trevor Schaaf.

"I love it. I think it is even better than 11-man. It is more open and there are more touchdowns, that is the best part," said Fulton.

"This is my first experience with 8-man football and I love it. It is a really fun, fast, exciting brand of football. The community support here in Wilson has been great. They are super hungry for good things to take place. We are going to try to build on what has happened here before and just take it to a new level," said Coach Ridley.