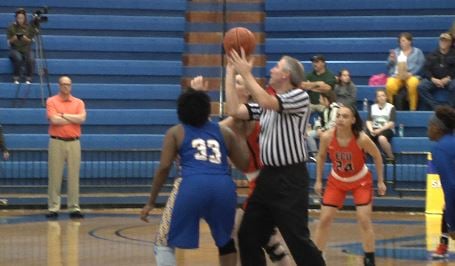 DURANT, Okla. - Southeastern used a 13-4 advantage in the third quarter to take control of the contest and pull out a 53-42 win over rival East Central on Tuesday night in Bloomer Sullivan Arena.

The win lifts the Savage Storm to 11-13 overall on the year and 9-10 in Great American Conference play.

"We made this game interesting," said head coach Darin Grover, "Because we missed so many layups in the post. Emem David missed a couple in the first half, but made them in the second half. Then Sa'Liesha Hunter missed a wide open layup. I thought Katie Branam came out and played well and did exactly what we wanted her to do, which was drive hard then kick it out. They were leaving no help underneath so she was able to drive, throw a post move, and put it up. It's awesome how her mentality is already so focused for being a freshman."

Courtney Brady paced SE with a 12 point performance on 3-of-6 shooting with a perfect 6-for-6 effort at the free throw line.

She was joined in double-figures by Katie Branam who was 4-of-7 from the field for 10 points.

David led all rebounders on the glass with 10 rebounds as the Storm held a 39-to-24 edge on the glass.

Southeastern hit 7-of-11 from the field in the first quarter and nailed the only three it took, but the quarter featured five ties and six lead changes with a Chandler Kemp layup at the 1:15 mark giving the Storm a 15-14 lead at the first break.

Both teams opened the second quarter on a five minute drought before ECU hit the first bucket of the quarter. The Storm would answer with four-straight points to go up 19-16, but the Tigers would close out with five of the last seven points of the quarter to tie the contest at 21-21 at the halftime break.

The Storm took control in the third quarter, running off an 11-2 run over the first 7:45 of the quarter, capped by an Ariannah Kemp bucket to give SE a 32-23 lead which would end up a 34-25 advantage heading to the final frame.

Southeastern answered with the game's next eight points to jump out to a 50-38 lead and would hold on to pick up the 53-42 victory.