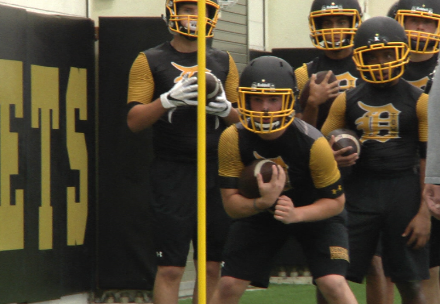 DENISON, TX. -- The Denison Yellow Jackets come into 2017 with confidence, coming off the school's first trip to the playoffs since 2013.

"The class of 2017 put the foundation down," Denison DB Ty McFail said. "All we have to do is build off that and bring everyone along with us."

"Culture is a big thing that will help you win a lot of ball games," Denison Coach Chad Rogers said. "They will accept from their teammates and hold each other accountable. They want high effort, want them to do things right and that's very important."

One of the seniors Coach Rogers will be looking toward is quarterback Austin Emory, who returns to the field after missing most of district play due to injury.

"He was just coming into his own when he had the injury," Rogers said. "So he stayed in tune with the game, the mental aspect of it, and his teammates love him. He isn't one to yell and scream, he just goes out and does his job and leads by example."

"Proving everybody wrong," Emory said. "It's kind of, see how good you can bounce back. I'm pretty excited to start up again."

And all the Yellow Jacket seniors want to make 2017 a memorable campaign.

"It's kind of sad, kind of bittersweet," Emory said. "It's your last time to go, but it could be the best."