Witness pulls driver out of burning car at Denison intersection 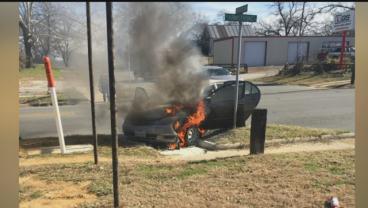 DENISON, TX – A man is lucky to be alive Monday night, after his car burst into flames at a local intersection with him still inside.

Denison police say a 30-year-old man had a seizure while driving on Armstrong Avenue.

It led him to press down on the brake and gas pedal at the same time. They say the engine overheated causing the car to set on fire.

It happened at the intersection of Armstrong and Munson.

Neighbors say they could hear it happened from a block away.

"People ran up and asked, do you have a fire extinguisher,” said Lorrie Duncan, who witnessed the crash, “I ran and grabbed mine, they used it, they pulled him out and then when the car flared back up they pulled him on further over."

Officers say the driver was unconscious when a witness pulled him out of the vehicle.

The man was taken to the hospital with non-life threatening injuries.