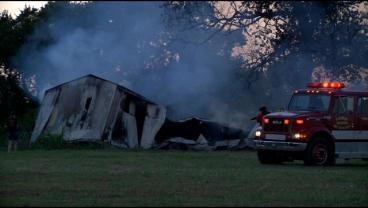 The fire started around 8 tonight at a trailer home on Bringham and River road.

Firefighters fought the flames for minutes, but it was eventually put out. The mobile home will likely suffer very severe damage.

Drivers on Highway 75 tonight said they could see the smoke from Denison.

It isn't known if anyone was in the trailer when the fire started, but it appeared to be vacant.

Fire officials will now begin their investigation into what caused the flames.

We'll bring you more information as it becomes available.