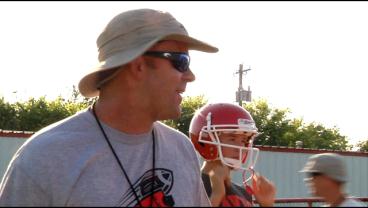 DAVIS, OK -- At this time last season, the Davis Wolves told us they planned to go undefeated and win the Class 2A State Championship, and they did exactly that.

"It felt great to win it all," head coach Jody Weber said. "Wouldn't say we've moved past it but we definitely have a new focus. We're going to always look back, and everybody that was on that team and in our community when it's time is going to look back and watch the old film and highlight tapes. But that time is over for now."

The time to celebrate has come and gone for the Wolves but the target on their back is here to stay.

"It's a great feeling and we know everybody is going to be after us this year. But we have to, in a way, not think about it. But it's always going to be there. It's kind of cool, people being afraid to play us," senior quarterback Blake Summers added.

Unlike in 2012 when the Wolves only returned two starters, this season they have 11 coming back and it's no surprise they are once again the Class 2A title favorites

"Our ultimate goal for the season is to win a state championship. But right now, we have to find out who this team is. And that's going to take place every day and there's going to be a lot of changes made between now and mid season, even personnel wise. So that being said, we would love to think that we're going to be good enough to win it again but we have no idea right now if we are," Weber concluded.