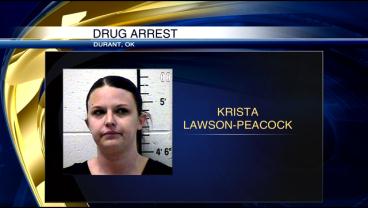 DURANT, OK -- A Bryan County daycare owner has been arrested for driving under the influence and police say she had children in the car with her at the time.

Police say Krista Lawson-Peacock, 28, of Calera, got into an accident last Thursday around 3 p.m. at South 9th Ave. and Arkansas in Durant.

She operates the nearby Wonderland Learning Center. Police say the woman's speech was slurred and she was not able to follow instructions.

The four children in the car were released to their father. Police say she told them she had taken some prescription medications -- Soma, Narco, and Xanax -- for migraines.