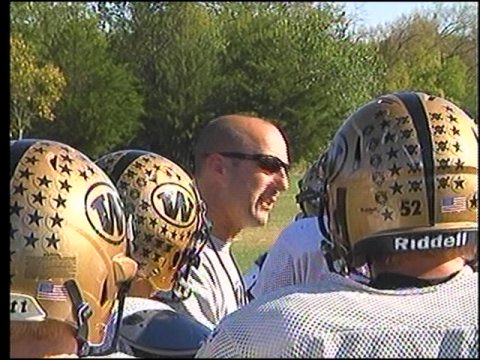 WHITEWRIGHT, TX -- The Whitewright Tigers are having to continue their State Championship journey with the help of back-up sophomore quarterback Jefferson Ballard.

All season the team has relied heavily on the arm and legs of preseason All-State quarterback Tyrone Swoopes, an NCAA Division-1 prospect with offers from Stanford, Texas and Notre Dame.

In Ballard's first game as the starter last Friday Whitewright suffered a 42-17 defeat from Leonard.

But despite the defeat and big shoes to fill, Ballard says he doesn't feel any pressure.

"Just get the ball to the right receiver or the running back, the right person that's about the only thing that gets into my mind," he said.

Swoopes won't be out for much longer and he's using the time off to continue to be a leader off the field.  "During the game he'll like do something and get down on himself and I'll go pick him up and be like alright and the next play is the most important play so it'll be alright," Swoopes said.

Coach Jack Wylie says when Swoopes graduates in 2013 it will be Ballard as the every down man under center, but even now as a sophomore Wylie can put his trust in the young gun.

"He already played in about three or four games leading up to it, so had he not done that might have been questionable. I think he's ready," Wylie said.