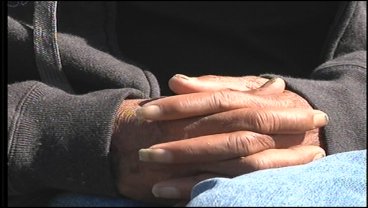 SHERMAN, TX--A homeless man that has been living on the streets for nearly eight years is reunited with his family in Texoma. A blessing in disguise, and a good Samaritan led the man home.

Hermilio Augilar is no stranger to the streets, but the walk down this street in Sherman is a little more comforting for 61-year-old Hermilo Aguilar

He's finally home after being home-less and away from his family for the past 8 years.

"I thought he was dead," Angel Aguilar said. "I was waiting for a phone call to say he was dead.  But here he is eating walking...hanging out with me and the kids.  The kids are calling him, grandpa.  I'm glad he's home.  He's not going anywhere.  I'm going to make sure of that."

A terrible incident led the man back to his family. Two weeks ago he was allegedly beaten by a Dallas restaurant owner with a pipe when he couldn't pay for his meal. Here are pictures taken after the alleged incident. Aguilar was arrested for credit card abuse, but the incident was a blessing in disguise.

Dallas residents Pat Kinnard and his wife read about what happened and decided to bail out Aguilar and try to find his family. He found that Hermilio's two sons lived in Sherman.

"After discovering that he was homeless, we kind of put a plan in place to keep him safe and from there we decided to find his family and that's what we've done tonight," Pat Kinnard said.

The reunion brought tears of joy for the Aguilar family, and a chance for Hermilio senior to meet his three year old grandson Hermilio junior who was named after him.

"He did an extraordinary thing, he went above and beyond not knowing who he is. What he's done," Hermilo Aguilar said. "For him to risk all he had all that time and money. To help him out to get him back to us.  I am thankful.  God Bless him and his family.  If there is anything.  If there is anything to repay him for what he has done.  I'll do it."

The man accused of beating Hermilio Aguilar was arrested over the weekend on misdemeanor assault chargers. Good samaritan Pat Kinnard did not want anything in return for bringing Hermilio back to his family.