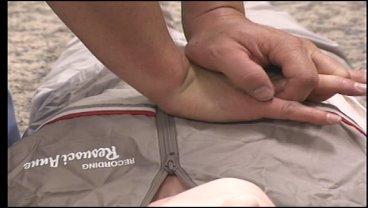 ARDMORE, OK-- Every 5 years, new guidelines for CPR training are released after years of research and studies.  Monday, the American Heart Association made it's latest findings public. Meredith Saldana has more on this story.

For years the CPR motto was "It's as easy as ABC", airway, breaths and circulation or compression.

Monday, it became it's as easy as CAB.

Robert Reynolds an RN with Mercy Memorial Health Center says, "That is the change now, that they want you to do the chest compressions first. The oxygenated blood is still in your system at the time of your cardiac arrest. It still has oxygen, so obviously if we circulate it by chest compressions then we're doing the patient a world of good."

CAB stands for compression, airway and breaths and it's good news for any bystander who finds themselves in a situation where a complete stranger collapses near them.

Officials say for years the thought of having to perform mouth to mouth on someone in need intimidated even the best good samaritans.

However, the 2010 guidelines just released say it's all about faster chest compressions first.

"The recommendation is at least 100 chest compressions per minute, so that is a fairly rapid pace."

Reynolds says the changes made are far from an inconvenience to people teaching others proper CPR.

"I mean anytime the A.H.A. makes changes in their official guidelines it means that the research is there, the science has been studied, research is there and this is obviously the best thing we can do to give these patients a chance for survival," says Reynolds.

For people who are trained in CPR, the new guidelines still call for 30 compressions then to open the victims mouth and deliver two breaths.

For more information on the changes made to the CPR guidelines you can visit the American Heart Associations website.

They have an instructional video explaining the new 2010 guidelines just visit http://www.heart.org/HEARTORG/.

The new guidelines apply to adults and children but not infants.