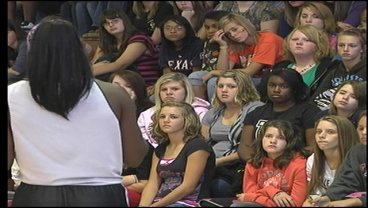 DENISON, TX -- Denison middle school students had a very special guest Friday. WNBA All-Star and two-time Olympic gold medalist, Ruthie Bolton, made a stop as part of her "Tour of Hope." Deeda Payton spoke to Bolton about her efforts to inspire and empower young women.

Bolton is world-class athlete and was even a First Lieutenant in the U.S. Army Reserves.  She is the definition of a role model and now that she is retired from the WNBA, she is spending her time mentoring and coaching young women.

Friday afternoon, Ruthie Bolton visited B. McDaniel Middle School in Denison. She spoke to a gym full of young women about attitude, perseverance and dedication. "I want to encourage them to keep fighting, keep pressuring and keep believing in themselves and you know what the worst case scenario if they don't make it to the next level at least their hard work won't go in vein because it's going to prepare them for the real world."

Saturday, October 16th, Bolton is hosting an all star girls basketball clinic at the Sherman High School Gym. Registration opens at 8:00am. it costs $20. All the money benefits the RB Foundation. All girls between the fourth and twelfth grade are invited to attend. For more information call 903-744-3519.