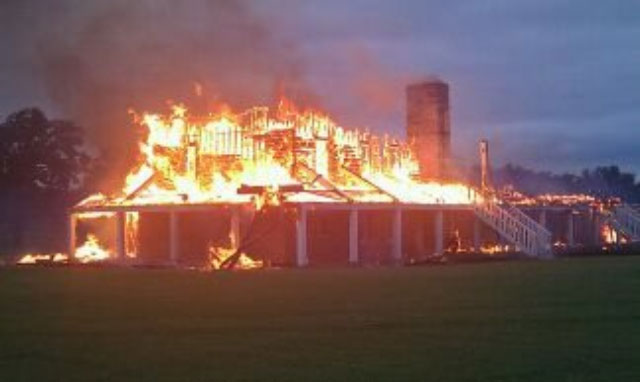 BRYAN CO., OK -- The restored south barracks of historic Fort Washita has burned and is a total loss. The cause of the fire is still under investigation. Fortunately, no injuries have been reported. Fort Washita is located 15 miles northwest of Durant, and 15 miles east of Madill, on SH-199.

Mary Horth wanted to show her nephew Fort Washita Sunday morning. When she arrived, she was shocked to find it was reduced to rubble.

"Because I love this place, and I can't believe anybody would be so selfish to come out and burn this place," Horth said.

The last fire that Washita has seen was after the Civil War. After Sunday morning, it's nothing more than a pile of ashes.

"I have four sons and all of them have grown up out here basically because I've been here 23 years, so they come out and help me with some projects--some shows," Larry Marcy said, Park Superintendent.

Marcy said he came out to the park as soon as he heard the news. By then, it was too late.

"It's really disheartening to see the show piece of your site disappear in the manner that this one has," Marcy said.

The landmark has been a destination for school field trips and family get-togethers since it was rebuilt in the 1970s.

"I've been out here since I was a kid. I've been coming out here with my family," Vallie Lucas said, Fort Washita volunteer. "My mother and father, we use to come out for picnics and Easter egg hunts, and I've brought my family out here."

Several volunteer fire departments responded to the scene that morning. The building is a total loss.

"It's sickening," Lucas said. "It's truly sickening. It was something that we were very proud of out here. It was one of our national landmarks."

The cause of the fire is still unknown. Authorities are doing a full investigation.

"It breaks my heart that there's people out there in the world that would do something like this to historical sites," Dustin Roberts said, candidate for State Representative District 22. "I mean, this thing has been in the families forever and it's dear to the people of Bryan County."

Park workers are unsure if, or when, it will be rebuilt. The Fire Marshall will do a full investigation Monday.