Inside Look at Woodmen Circle Home 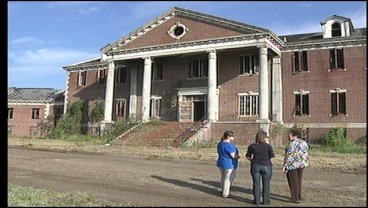 SHERMAN, TX - It is Texoma's most intriguing landmark. In it's day - the Woodmen Circle Home was called the mansion on the hill. Time and vandals have taken it's toll, but 80 years later the building still maintains it's allure.

Majestic, yet lonely the old Woodmen Circle Home sits on the highest hill in Sherman - watching life slowly return to the property. Pulling weeds from it's stately steps, a group of dedicated women prepare to open the grounds to hundreds of curious Texomans.

"People are really excited," said Tammy McNew-Blanton with the Red River Historical Museum. "Especially anyone that's over 40 and remembers the good times."

The good times once held inside it's walls are all but forgotten, except in the minds of a few, like Linda Robertson. She is the last surviving employee at the home. She began washing windows at the age of 13 and worked as a nurse's aide years later.

Built during the height of the Great Depression, the home was founded by the Supreme Forest Woodman's Circle - the auxiliary to the Woodmen of the World Fraternal Organization. Raising thousands of dollars during tight times, women founded the home, then supplied care to aging widows, their children and orphans.

"The early founders of the Woodman Circle were forward-thinking women," said volunteer Kathy Flynn. "I think it started as women reaching out for other women and the idea was truly novel and I think it took off from coast to coast."

Financial strains forced it's doors shut, putting an end to 40 years of service within the community. Since then, the home has become better known for it's brief ties to a questionable church and vandalism.

"A lot of people see this place and think, 'What is it? Is it haunted? Is it a cult's home?' No, it's not," said Robertson. "It was beautiful, beautiful."

Volunteers gave KTEN an unprecedented tour inside. Time has faded the paint. Graffiti covers the walls. Unique fixtures and moldings have decayed or been stolen. Yet the allure remains.

Kathy Flynn took us step-by-step through the house, explaining the purpose of each room. Old pictures help fill in the details - showing a beautiful blue guest room, a large formal dinning room with floors and a sunroom perfect for viewing the Texas sky. New home movies just discovered also show day-to-day life on the working farm.

"To me it has always been a neat place, and to me, just like bygone times," said Tammy McNew-Blanton. And you wonder will those times every come back?"

Volunteers will scramble to clear the grounds and rope of areas deemed unsafe, anticipating large crowds this weekend.

"I am hopeful by the time we d this, it will raise more awareness about the museum and this place," said Flynn. "If you don't capture the history of those stories while those people are alive it's gone forever."

"I've seen this home in it's glory. I've seen it shut down and I've seen it worse than it is now, and I see it how it is now," said Linda. "And I'm the happiest person in the world."

Linda and volunteers hope some of the homes' secrets may be unlocked before the doors are shut again.

For more information on the museum's event http://hosting.texoma.net/rrhms/.

To see all of our photos and a vintage film reel of the residence go to our Exclusive Page: