Texoma's Own "To Catch a Predator" Leads to Two Arrests - KTEN.com - Texoma news, weather and sports

Texoma's Own "To Catch a Predator" Leads to Two Arrests 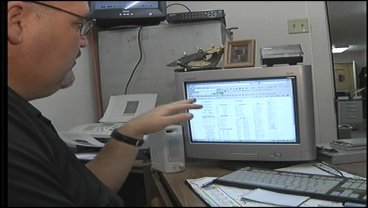 BOSWELL, OK-- The city of Boswell, Oklahoma is doing their part to keep our children safe. This weekend, they caught two potential sexual predators from the Dallas area in a sting called "Operation Pervert Arrest"

Though they are considered a small town, the Boswell Police Department is making big strides to catch potential online sexual predators, and this past Friday, they were successful for the third time. "I posted on Texoma's Craigslist and also on Dallas Craigslist," said Police Chief Bryon Gordon.

He first sets up a post on Craigslist claiming he's a young girl looking to have fun in Oklahoma. "I write back and forth, several e-mails, and on probably the second or third e-mail, I tell them I'm not quite eighteen: is that going to be a problem?" said Gordon. In the first fifteen minutes he posted, more than thirty people responded. But two specific men were not deterred by the idea of meeting a girl that was underage.

"We asked them to bring some protection, and also, some form of alcohol, so that we can show the intent that they really were coming there to see this girl," the Chief told us. The police department then sets up a meeting at the house of one of their own, and waits for the men to walk through the door to find a surprise they weren't expecting: four policemen with guns and handcuffs.

"There's probably not an amount of money that you can pay to remake this face. When they realize that they're caught, their look is like oh my gosh. One of them, on Friday night, he just kept saying 'can you go ahead and kill me now, just go ahead and shoot me now, my life is over.' They realize they've made a big mistake," admits Gordon.

The arrests Friday night of 22-year olds John Pelser and Paul Krantner, both from the Dallas area, brings the total arrests to five, and they aren't stopping there. Boswell plans to become an official part of the Oklahoma Task Force for Internet Crimes Against Children very soon.