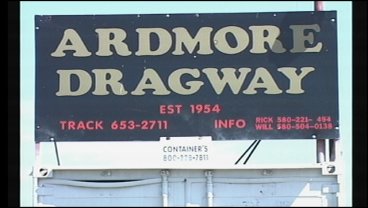 ARDMORE,OK--This weekend thousands of people are expected to head to Ardmore for a big race event.

The Ardmore Dragway will celebrate it's 55th birthday.

Hundreds of race cars will hit the track in just a few days.

The Ardmore Dragway is located on Highway 77 on the northside of Ardmore.

It was started by several men more than sixty years ago.

One of those men, Jim Ragland, still frequents the dragway.

"Oh, no, no we were just kids probably 19 or 20 did racing up and down the streets getting tickets every Saturday night. That's what started this," he said.

These days, the track is still thriving and this weekend it will celebrate it's 55th birthday with the Hot Rod Reunion Race.

"This is going to be our biggest weekend of the year at Ardmore Dragway. We're expecting about 3,000 spectators and over 300 race cars this weekend," said Rob Ragland.

Event planner Rob Ragland, son of one of the original founders, says this celebration is a milestone--since many dragways across the nation have been forced to close over the years.

"The communities have moved into the suburbs and in the country and taken over the land and thankfully Ardmore goes the other direction and not this way," he said.

Ragland says this weekend's race will showcase cars that will reach speeds of more than 200-miles per hour!

Needless to say these cars aren't your average sports car.

These cars draw thousands of fans.

In fact, Jim Ragland brought this car worth about 1.5 million dollars to the track for this weekend's race.

He says he remembers watching this exact car rev it's engine on a Texas track more than 40 years ago.

"I wouldn't have believed that I'd be towing this car down the road. We was sitting up in the bleachers and watching it forty-six years later but we've had a lot of fun." he said.

The gates will open Friday at 4 p.m.

It costs ten dollars for adults and children twelve and under are free.