Tioga Police Chief May Have Shot a Chupacabra 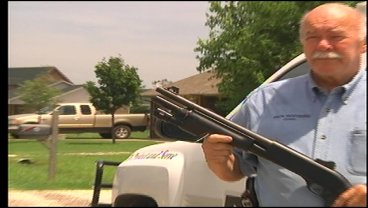 TIOGA, TX -- The myth of the Chupacabra continues. Thursday, after airing a story about a Texoma woman who claims she owns a Chupacabra-like pet, the Tioga Police Chief called saying he may have shot one. Deeda Payton has his story.

It's the stuff legends are made of, tales of a Chupacabra shot but not killed in Texoma. It made for some interesting lunch conversation in Tioga, TX.

Police Chief, Dick Rodgers, says he has come face-to-face with a beast fitting the description of the mythical Chupacabra. "Since I confronted it within 10 to 15 feet and it aggressively came toward me. I would have to believe that it's a fact," said Rodgers.

It all started when Rodgers got a call about an aggressive animal out on Lakeshore Drive. "The head and the snout of the animal are very much different from any animal I've ever looked at," said Rodgers.

He says he chased it down the street and along a fence, cornering the animal. That's when he said the animal lunged at him. "I shot it, shot at it with a shotgun, wounded it in the face, shoulder and leg and then it ran off in another direction about 15 to 20 feet and collapsed," said Rodgers. But, the beast took off leaving only a puddle of blood.

Rodgers says he doesn't know if it was in fact a Chupacabra because it all happened so fast, but believes it is the same thing a Hood County, TX man shot earlier in the week. "We'd like to capture it if possible or find it if anybody sees it lying around dead before they remove it so we can get pictures and determine what it is."

Regardless of whether or not it is the mythical beast, Rodgers says it is a beast nonetheless and a real threat to the community.

If you have seen or know anything about the animal Rodgers is describing, you are asked to call Tioga Police at 903-870-6215.