Tornado Precautions: Know What to Do - KTEN.com - Texoma news, weather and sports

Tornado Precautions: Know What to Do 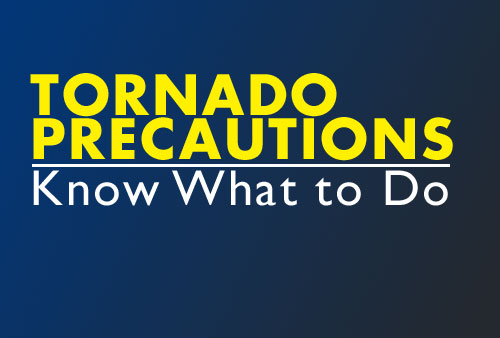 With the help of the KTEN SkyAlert Weather Team and FEMA.gov here is information you need to know on how to prepare for a tornado:

Tornadoes are nature's most violent storms. Spawned from powerful thunderstorms, tornadoes can cause fatalities and devastate a neighborhood in seconds. A tornado appears as a rotating, funnel-shaped cloud that extends from a thunderstorm to the ground with whirling winds that can reach 300 miles per hour. Damage paths can be in excess of one mile wide and 50 miles long. Every state is at some risk from this hazard.

Some tornadoes are clearly visible, while rain or nearby low-hanging clouds obscure others. Occasionally, tornadoes develop so rapidly that little, if any, advance warning is possible.

Before a tornado hits, the wind may die down and the air may become very still. A cloud of debris can mark the location of a tornado even if a funnel is not visible. Tornadoes generally occur near the trailing edge of a thunderstorm. It is not uncommon to see clear, sunlit skies behind a tornado.

The following are facts about tornadoes:

Familiarize yourself with these terms to help identify a tornado hazard:

Tornado Watch
Tornadoes are possible. Remain alert for approaching storms. Watch the sky and stay tuned to KTEN-TV, a NOAA Weather Radio, or a commercial radio.

Tornado Warning
A tornado has been sighted or indicated by weather radar. Take shelter immediately.

What to do Before a Tornado

Be alert to changing weather conditions.

Listen or watch your local weather forecast from KTEN-TV, KTEN.com, listen to your NOAA Weather Radio,  or even your local radio station for the latest information.

What to Do During a Tornado

If you are under a tornado WARNING, seek shelter immediately!

Recovering from a disaster is usually a gradual process. Safety is a primary issue, as are mental and physical well-being. If assistance is available, knowing how to access it makes the process faster and less stressful. This section offers some general advice on steps to take after disaster strikes in order to begin getting your home, your community, and your life back to normal.