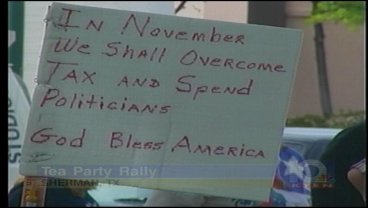 GRAYSON CO., TX- Some local Tea Party activists held a rally Thursday in Sherman. More than 100 people gathered at the Grayson County Courthouse to express their concerns with the government. Meredith Saldana was there and has more on this story.

Many people brought signs, some even took the microphone and spoke to the crowds.

Even some students from Austin College voiced their opinions.

While we were at the rally we spoke to some women standing on the corner displaying their homemade signs.

Liberty Davidson talked to us about why she was at the rally, "Because we do have a right. We have a freedom of speech and this nation is blessed with a lot of freedoms that other nations don't have."

Kathy Bell also attended the rally, "There's just something that's going on in our government right now that I don't agree with. So I came out to voice my opinion."

The rally was from 3pm to 7pm and everything seemed to go smoothly.

We received some emails saying Tea Party protestors would also be in attendance, but none of them showed up.