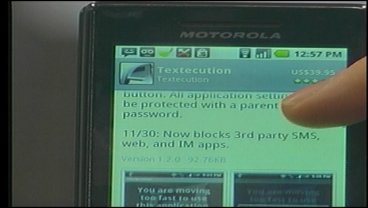 Turning now to safety concerns about teen driving.  States across the county have placed bans on texting while driving and the bans have hit the Texoma area as well.  But is that enough to keep your child from texting behind the wheel?

Around 21% of fatal car crashes involving teens between the ages of 16 and 19 is due to cell phone usage.  Texting bans are a great idea but to many drivers are still getting away with sending texts.  Now a new cell phone application can to cut off your phone's ability to text when the car is rolling.

The driving dangers are causing parents concern.  But one dad is stepping in and putting a stop to texting behind the wheel.  Now, your cell phone has an app for that too.  "I invented it for my son.  I came up with the idea when he was 15 and had his learners permit.  I wanted to figure out how to prevent him from texting while driving," explains Jonathan Young creator of the new application called Textecution.

Textecution works through a download on your cell phone.  It uses the phones GPS system to track your speed and once it feels the phone moving more than 10 miles per hour it disables your ability to send a text.

But if you child isn't driving and wants to send a text, they can do so with your permission.  "If the child is on a field trip or is a passenger in a car, the child can press a button and it will send a text to the parent asking to disable Textecution," says Young.  That will disable the texting function for an extended period of time.

Now that the word is spreading about the new application, it's getting a "thumbs up" from mothers and even young drivers.  The application is compatible with android phones. For a complete list on which phones and providers can use this application, you can click on the web site below.