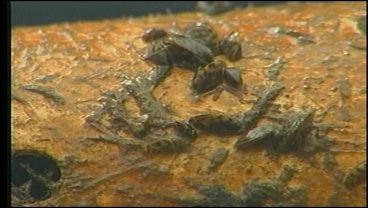 If you love Lake Texoma, look out those pesky zebra muscles we told you about last year are back with a vengeance.

The little critters are spreading and have been found in every area of the lake. Right now the water is cold enough to kill some of them but once the water temperature rises to 50 degree officials say the zebra mussels will begin to spread.

Zebra mussels are a huge problem for boaters and lake home owners. Todd Robinson, a Lake Texoma Fishery Biologist says, "The mussel gets inside a boat's cooling system and prevents water flow causing an engine to over heat and break down", and John Moczygemba adds, "The pests can harm home pipes too. Anything that uses intake of lake water or some type of pump system, the mussels will attach."

Lake Texoma officials are looking to stop the spread of the zebra mussels by catching them with portman samplers that have been placed in every area of the lake. These samplers mimic an inviting environment for zebra mussels causing them to attach and then be pulled from the lake.

Boaters can also have a huge effect on the spread of these zebra mussels. Robinson says, "If boaters go from Lake Texoma to another lake within 1 week, they can spread the zebra mussels to many areas of water and cause havoc up and down Central Texas.

If you own a boat, you can help stop the spread by draining, cleaning and inspecting your boat after each use. The cleaning process is something boaters can expect to be quite common this spring.

If you find zebra mussels attached to your lake equipment and want to know the specifics on how to clean your boat you can click here.