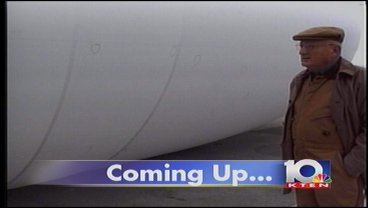 You remember the blimp that crashed a couple of weeks ago on Interstate 35.  The owner says someone shot at his blimp! Meredith Saldana was there as police investigated, she has more on this developing story.

Marvin Polzien says he noticed some holes in his blimp the morning after making his crash landing, but Wednesday he fully inflated the blimp and noticed over 20 holes.

That police say, are in fact from bullets.

Polzien says his blimp deflated the morning after his emergency landing on I-35.

And that's when he noticed a few holes but decided to patch them up.

Polzien says, "Now this morning, well just look at that, we found another 15 or 20 more so I mean somebody was really shooting at me! And what if one would've hit me?  I mean I may not be here."

Polzien says many of the holes were found on the bottom of the blimp which leads him to believe it happened during his unsuccessful flight just a few weeks ago.

He did call the Carter County Sheriff's Department who came out to investigate and confirmed that the holes were caused from bullets shot from a 22-callibur gun.

They're still investigating when this could have happened and who would've shot at Polzien's blimp.