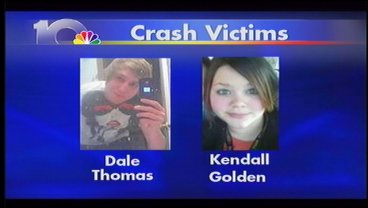 WHITESBORO, TX - Students in Whitesboro are mourning the loss of a friend and classmate.

Sherman Police say Dale Everett Thomas, 18, of Sherman and Kendall Golden, 16, of Whitesboro died early Sunday morning on Highway 82, after crashing their car. A third teen from Sherman survived but was taken to Parkland Hospital with serious injuries.

It was an emotional and somber day for Whitesboro High School, as students returned from holiday break. Kendall Golden was a well-liked junior at the high school and very active in the Bearcat Band. She played the trumpet.

News of her death has hit the entire community hard, but especially her "band family."

"She's a great kid," said Jim Cude, Whitesboro Band Director. "Just full of life and great to be around. Such a bright kid and had a great smile. She made everybody feel good. So we're going to miss her."

Kendall was closest to those friends in band and spent many hours perfecting her music inside the band hall. Kendall's roots run deep in Whitesboro. Her older brother played in the band and graduated from Whitesboro High a few years ago. He is now in the military serving overseas.

Cude says he had to face her friends early Monday morning with the tragic news. Many of his students had already heard of her death on Sunday, but Monday gave them a chance to get together and talk openly about their loss.

"We talked about how life is not fair - and they understand that," said Cude. "For them it's hard because band is like any type of sports team or group. It becomes your family. We work together. We have fun together and when something happens like this it affects us all."

This is the second death of a Whitesboro High School student this school year. Another student passed away in November.

Whitesboro Superintendent Dr. Steve Kolb called Golden's passing a "heavy loss" for the community and district. Extra counselors were brought to the high school Monday and several students reached out to those adults for counseling and support.

Funeral services will be held Friday afternoon for Golden. In lieu of flowers the family is requesting donations be made to the "Kendall Golden Band Student Support Fund." The money will help Kendall's friends and future band members pursue band-related activities like paying for instruments or attending band camp.

Police have not released the name of the teenager seriously injured in the accident and saying the crash is still under investigation.