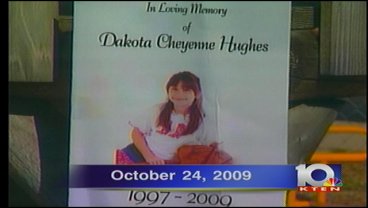 Three weeks before her 12th birthday, she was found dead in her aunt's home.

According to investigators, her body showed signs of struggle.

Right now, Jason Lee Belew is behind bars, facing first-degree murder charges for her death.    He's being held without bond in the Bryan County Jail.

Now, the entire incident is leaving loved ones somewhat lost.

"I am very sad that the world's got to be an empty place without Dakota," says Picens.

Rather than spending time on swings and slides outside a hometown church, Hughes was taken inside, where loved ones could try to find comfort.

At the end of the ceremony, she was brought to her final resting place in Pilot Point, TX.