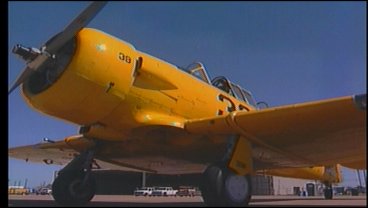 GRAYSON CO., TX---It's an annual event at the North Texas Regional Airport where people can come out and see the best of the best of airplane performers. Michelle Gillespie actually got to go up in one of those planes.

She reports that it was a thrilling ride, that lasted all of about 10 minutes! She also caught up with one of the pilots who likes to say that he "flies in the stars, and with some stars".

Performing pilots from across the country will showcase their talents at this year's airshow and among all those top-notch aviators, you might see this man, a North Texas native and a celebrity in his own right.

"You've seen me and don't even know you've seen me unless you read the credits at the end of the movie," says J.W. "Corkey" Fornof.

The name J.W. "Corkey" Fornof doesn't ring a bell? That's because he does all the flying in big name Hollywood movies, but you never see his face.

"Oh, it's fun, it's taken me all around the world, I've flown on every continent in the world and over 300 different types of airplanes," says Fornof.

He's a stunt pilot, most known for his flying in James Bond films, but he's also worked with actors like Nicholas Cage, Harrison Ford, and John Travolta.

Tomorrow will be another day he wows an audience when he takes to the skies at the Grace Flight Airshow at the North Texas Regional Airport.

Tickets are ten dollars and free for children under 12 years of age.