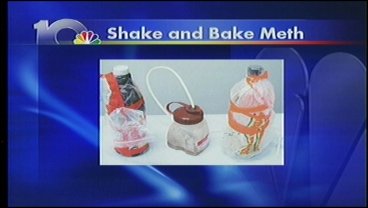 The recession may have hit the illegal drug industry as new evidence surfaces showing users are making meth from home instead of buying it off the streets.

The shake and bake method was a popular way of creating meth for personal use back in the 1980s and now the method is resurfacing.  It's created using a plastic bottle or container making the illegal substance in a small quantity for the use of only one or two people.

The problem, it mixes chemicals under extreme pressure in a plastic container.  Most plastic containers can only hold around 10 to 15 pounds of pressure but when the toxic chemicals are placed into a plastic bottle it creates a pressure that can exceed 100 pounds per square inch which can create an explosion.

When police find evidence of meth created by the shake and bake method, they are not looking for a dealer, instead they know the contents belong to a user.  Officials say users could be turning to this home made process because it's cheaper than buying them off the streets.

Multiple cases have been reported in the Ardmore and Lawton areas, but Tulsa tops the list with 190 cases already this year.

Officials ask if you find a plastic bottle containing a grainy substance to call police, do not try and pick it up.