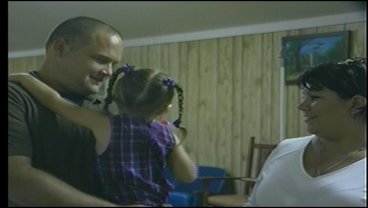 KINGTSON, OK---A three year-old toddler who's ear was bitten off by a stray dog less than a month ago is now in recovery after several surgeries. Michelle Gillespie reports.
Now her family faces mounting medical bills and one local agency has stepped in to help them out.
Three year old, Dakota was very energetic and smiling at tonight's ceremony.
And her mother, Renee tells me it's all because of the support of friends and family and the generosity of the Masonic Lodge in Kingston.
"It's really nice to have a supportive community and people to help us out in our time of need," says Renee Hall.

Officials at the Masonic Lodge presented the Hall family with a $1,000 check tonight to help out a family who faces more than $15,000 in medical bills with no end in sight.
Dakota's mother, Renee, says the young girl has already gone through seven surgeries to begin the reconstruction of her ear--surgeries that can only be done at Children's Medical Hospital in Oklahoma City.
Now, Dr. James Talley who is President of the Kingston Masonic Lodge says the they've taken it upon themselves to help out those in need, just like the Hall family.

"It all gives us a sense of pride and joy to be able to give back to our community and promote charity and brotherly love throughout the community and that's basically what this lodge is about," says Dr. James Talley.
Although Dakota is nearing the end of recovery, she has another surgery in early October to attach a prosthetic piece to the tip of her ear and her mother says she'll have to have her ear reconstructed and sized as she grows older.
The family has also set up a fund for young Dakota at the Landmark Bank in Kingston under Dakota's first name and with more surgeries in the future, the family is asking for donations of any size from the local community.
Michelle Gillespie, KTEN News.