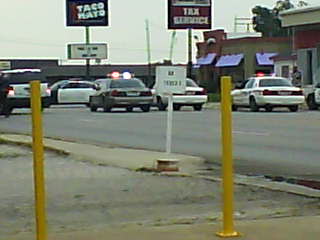 Tragic news for the small community of Seminole, OK. Investigators say two Seminole County Sheriff's deputies have died after a man opened fire as they tried to serve a domestic abuse arrest warrant.

OSBI spokeswoman Jessica Brown says Ezekial Holbert, 26, is being held on first-degree murder charges and could face more charges. According to Brown, one deputy died at the scene Sunday afternoon. The other died at an Oklahoma City area hospital. Brown said a bystander was shot in the arm. Their names have not been released.

Holbert was at his mother's house in Seminole when she called police around 3 p.m. saying he wasn't welcome. Brown said Holbert started shooting when three deputies arrived.