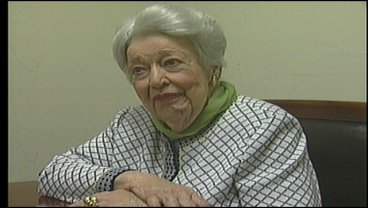 We told you north Texas is in a sort of a bubble when it comes to the real estate market. Today, Ebby Halliday was in town opening a new office in Whitesboro, further proof that Texoma is doing better than the rest of the country. Deeda Payton caught up with the 98-year-old real estate legend known as the "First Women of Real Estate."

Halliday says the real estate market in north Texas is doing so well that her business has actually grown from being a part of it.

She is an American realtor who founded Ebby Halliday realtors more than 60 years ago. Today her company sells more homes than any other broker in Texas. And, in this tough economy, Ebby Halliday says she is grateful for the lone star state. "The economy is cyclical and it affects every industry, but Texas especially north Texas has been much less affected by the downturns."

Halliday says she built her business the way you build a house, from the ground up, and she feels her success and the accomplishments of her company are a direct result of the associates she works with. "This woman who came to me 50 years ago as a part-time secretary is now the president of our company."

When asked if she dreamt of being a career woman as a young girl growing up in Kansas, the first woman of real estate says she had dreams but many of them included her favorite pony. "He was so broad backed and so easy that I could stand on a horse so I had visions of being a circus rider. Little did I realize..." "That this would happen? Would you say you have always been a risk taker?" "I would say so. Anyone in business is a risk taker and the risk takers are what built business."

Halliday, at 98, still drives herself to work every day and is very active in its management.