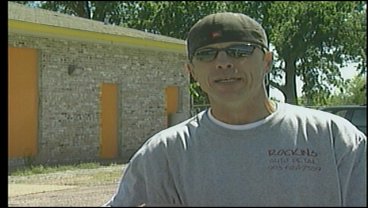 It made for interesting water cooler conversation Monday morning - an alligator spotted at Herman Baker Park.  KTEN's Katy Blakey joins us now where the animal is still on the loose.

No sightings so far Monday afternoon, but the animal is out there. A fisherman first spotted it. He didn't come back with any fish, but he did come back with quite a story.

"I was out there throwing my leer in and pulling it back in," said Sherman fisherman Damon Stewart. "I heard something come up behind me but I didn't think much of it. I threw my leer back out and again and went to roll it back in I turned around. And he lunged at my leg. I jumped out of the way and threw all my tackle down and went out to the point and he went into the water."

"I heard something creeping up behind me. Didn't know what it was so I threw my lure out there and reeled it back in. I turned around and when I did he was lunging. I dropped everything and ran out to the point."

Damon Stewart's fishing trip quickly ended when he came face-to-face with an alligator. When he got to work Monday, his co-workers didn't believe him. But animal control backed up his story.  Crews came out to Pickens lake Sunday and they spotted the six-foot-long alligator chomping on a fish. The park was roped off as a precaution.

Police and Stewart don't think the alligator would attack park visitors, but it could harm a small child. Monday night game wardens will be laying out traps, using chicken fish and maybe marsh mellows to bring the gator to the surface.

Stewart says he will return to the park to fish, but he won't go into that marshy area again even if they do catch the alligator.