Sherman Father of Soldier Charged in Death of Comrades Speaks Out 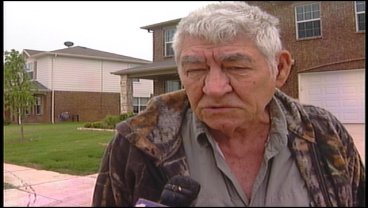 The same Sgt. John Russell accused of shooting several fellow soldiers in Baghdad Monday is from the Sherman area and has family members who live in Grayson County, Texas, and Bryan County, Oklahoma.

KTEN's Vanessa Bolano spoke - one-on-one - with the father of Russell, outside his Grayson County home.

We will have a full report on KTEN News at 5 and streaming video of his entire interview shortly on KTEN.com.

US-IRAQ SHOOTING
Source: Soldier from Texas in shooting is on third Iraq tour

WASHINGTON (AP) - A soldier from North Texas charged in the deaths of five fellow troops in Baghdad is on his third tour of duty in Iraq.
Excerpts of the record, obtained by The Associated Press, show that Sgt. John M. Russell previously did two one-year tours of duty in Iraq. One started in April 2003, with the other beginning November 2005.
Russell, who lists his hometown as Sherman, is charged in the five deaths following a shooting yesterday in a stress clinic in Baghdad.
An official said earlier that he believed Russell had enlisted in 1998, but the record shows that he entered the Army National Guard in 1988 instead and served in the Guard until 1994.
Russell became an active duty soldier in 1994.
The record shows the Texan served in Serbia through the last half of 1996 and Bosnia and Herzegovina in the last half of 1998.
The official spoke on condition of anonymity because he wasn't authorized to speak on the record.
---
Information assist from KTEN-TV: www.kten.com