Wildfires Burn Through the Sneed Area in Carter County 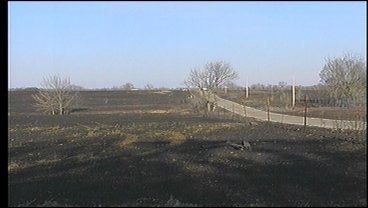 About a quarter of Carter County caught fire yesterday and today there are still fires to fight. KTEN's Deeda Payton visited the Sneed area near Milo today.

The Sneed area is desolate. Many of the people who were forced to evacuate yesterday have not returned.

Sneed is not a town, but rather a street and an area off of highway 53 West near Milo. As far as the eye can see, there is charred land, acres and acres of blackened rolling fields. Several homes and sheds also burned when the wildfires took over.

Cecil Allen who lives on Jehovah Road was forced to leave his home yesterday. Firefighters told him flames were coming too close to his house. "It was like disastrous I mean there was smoke everywhere...fire everywhere. Firemen wouldn't let you go home or get to your house."

Allen says his electricity and water has been off all day along with many of his neighbors. He says one of his friends is without a home today because his burned to the ground.

Although Sneed was by no means skipped over by the fires, officials say the Fox/Graham area saw the worst of it with more than 100 structures destroyed.