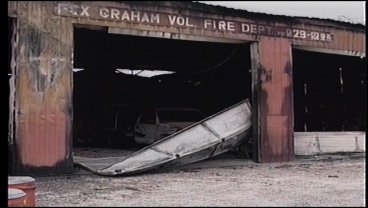 People we spoke with Friday in Fox told us the firefighters have always been there for their town and, they say now it's time for the town to step in and help the fire department.

There's nothing left of the fire department that's been a part of the town of Fox for more than 20 years.

While firefighters were out trying to save as many homes and livestock as possible, they received a call that their own station had caught on fire.

There was still one brush truck in the truck barn when the fire started. That, along with everything else in the department, was a total loss.

Firefighters lost equipment, records, and memories in the blaze. Friday, one area resident donated what she could to the department and challenges everyone else to just give a little, for a group that's given so much.

Karin Morrison donated a check. She said, "Everybody has something to give and I depend on them to help us and we have to help them."

Phillip Howell is a concerned citizen. He says, "Very important. If it wasn't for them we'll be in a lot of trouble."

Morrison says it's important to help the local volunteer fire departments. She says these men work their everyday job and drop everything when a fire breaks out, risking their own lives for those people in the community.

One former Fox/Graham firefighter told KTEN News that he helped build the building over 20 years ago and some of his best memories were in that fire station.