Thackerville Voters Head to The Polls 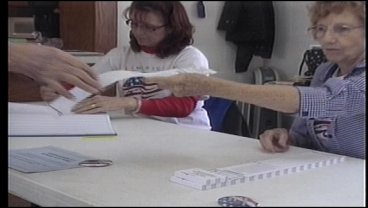 Voters showed up at the polls in communities across Oklahoma, Tuesday.  On the ballot for Thackerville,  a more than $4 million school bond.  KTEN's Meredith Saldana has more.

By lunch time over 100 Thackerville residents had already stopped by one precinct to exercise their right to vote.

You may remember a few weeks ago we told you about the Thackerville School District asking residents to pass a $4.6 million building bond to add on 9 classrooms, a gymnasium and new office space.

But some say the tax increase is too much for them to afford right now.

Tuesday, residents were able to voice their opinions at the polls and many of them said no matter what your vote is, it's important to vote.

Thackerville resident Chris Sherbert says, "I think it's a good thing that everybody gets out and votes for or against it just to voice your opinion."

Darrell Maggard says, "I have grand kids so I'm looking to their future."

Local resident Teddy Richie says, "Very important for the community.  If they want a say so in what's going on they need to come out here and vote."

The Love County Election Board says there are 916 registered voters in Thackerville that were able to vote at 3 different precincts.

All school bonds require a 60% approval from voters in order to pass.