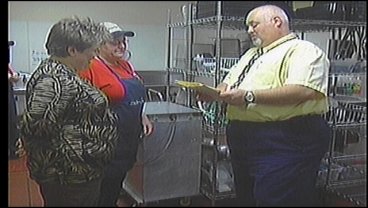 In this week's Behind the Kitchen Door, we're looking out for you and the cleanliness of your child's school cafeteria. KTEN's Deeda Payton breaks down the Bryan County Health Code Inspections as we go behind the lunchroom door.

Out of all the school districts in Bryan County, just three schools scored poorly enough to be written up by health inspectors.

At the end of January, the Durant Intermediate school was written up for one health code violation. According to the Oklahoma Department of Health, mouse droppings were found in a cafeteria storage room. The Food Services Director for Durant Intermediate, Mark Woods, says the issue has since been corrected.

"We did take all the violations seriously. We did contact our pest control immediately. He did come out, we also found out after talking with him the problem with the mice is extra more this year."

Woods says they have not seen any rodents since the exterminator visited. The violation is the first for the school since January 2007.

However, that is not the case for two other schools in the area. The Colbert Junior/Senior High school was written up March third for having an opening in their back door for rodents and insects to enter through. The school received a minor violation last year.

Achille Public Schools was also inspected March third. That school scored poorly in three areas, inspectors cited that some utensils and storage bins were not cleaned properly. The superintendent of Achille Schools released this statement regarding the evaluation.

He says, "The cooks at Achille are dedicated and hard working people, they provide two excellent hot meals a day. They are happy to be around and take great pride in doing an outstanding job every day. It is very dissapointing that someone would suggest otherwise."

Achille has received similiar violations in the past.

Here is a list of the schools in Bryan County that have been recently inspected and received no major violations: