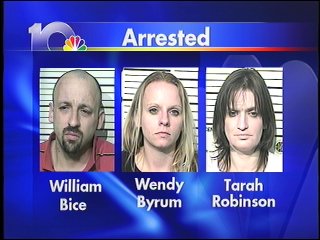 The crooks are using Visa gift cards to create their own credit card by adding stolen numbers, a name, and an expiration date. When they're swiped nothing happens, but then the clerk is asked to type in the credit card numbers.

Sherman police say several stores at the Sherman Town Center fell victim to the bogus credit cards over the weekend, but when a fake card was used at Best Buy, a clerk got suspicious and called police.

Sgt. Bruce Dawsey says this has been happening around the city.

"If your handed a credit card and the numbers are flat, that should be the first clue. Now if it's a legit visa gift card you should be able to swipe it and it will go through with no problem, but if it doesn't go through and your told to either enter that number manually, that should send up a red flag right there."

Police say the three were caught leaving Best Buy after trying to use a phony credit card.

Again, what you want to look out for are the numbers on the card. They should all be raised.