A Car Runs Down Three People at the Tyson Plant in Sherman - KTEN.com - Texoma news, weather and sports 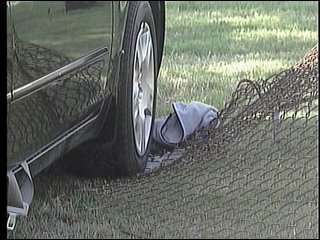 A driver runs down three people at the Tyson Plant in South Sherman, and all three people were hospitalized. Sherman police spent the day mapping out the scene trying to figure out what happened.

What caused the car to run through the median, off the road and into the fence. They say they don't know whether he was trying to turn into the Tyson Foods parking lot or if he was simply traveling southbound.

It's a case of being in the wrong place at the wrong time. The three victims were hit by a Nissan Altima while sitting in the plant's parking lot. Sergeant Bruce Dawsey of the Sherman Police Department explains what happened.

"Black vehicle traveling southbound on the control road. When it left the control road...drove through the median...thru the fence and struck the pedestrians that were sitting under a tree."

Two of the victims were flown to Parkland Hospital in Dallas, a man and a woman. A third victim, a woman, was treated and released from Wilson N. Jones. The 23-year-old driver and four passengers in the Altima received minor injures and were treated by the plant's health services department.

A spokesperson for Tyson Foods says all of the people involved are employed by Tyson and were participating in the plant's orientation. Tyson has issued this statement. "We're saddened by this morning's unfortunate accident and are cooperating with local authorities as they investigate what happened"

Police say the investigation is on-going and that there is a language barrier. It seems everyone in the car, and the three victims, are all from the southeast Asian country of Myanmar formerly known as Burma. Police say all of the people involved came from a Burmese refugee camp in Dallas.