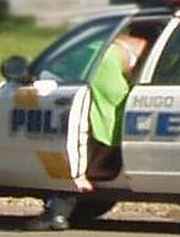 A Hugo police officer has been terminated from his position. Hugo city officials say that a citizen took this picture of the police officer engaging in activities in his police vehicle.

City officials would not speculate on the type of activity... and at this time... no formal charges against the officer have been filed.

The city of Hugo issued the following statement:

"The police officer was engaging in activities while on duty that could bring reproach and discredit to the city of Hugo, and the Hugo police department.