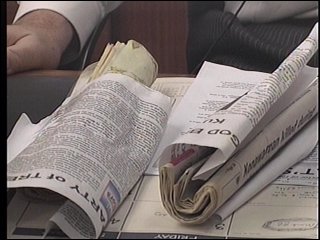 The Ku Klux Klan is active in Ada.  Residents have been receiving flyers from the white supremacist group.  Whoever is distributing the fliers is wrapping them around Ada Evening Newspapers and throwing them on lawns across Ada and surrounding cities.  KTEN's Meredith Saldana reports.

Newspapers were delivered to homes with the flyers attached.

Ada Evening News Publisher, Lone Beasley, says a couple of weeks ago a subscriber brought in the paper he received.

Beasley says he was shocked and appalled to see the flyer that was included.

He says it's completely unauthorized, and while the paper does sell advertisements to groups they do have the right to refuse advertisement and this is something Beasley said they certainly would have refused.

"It makes me feel violated as a newspaper, it's almost as bad as if somebody walked in with a gun and pointed it in our face and tried to rob us.  It's stealing.  I mean it's stealing our image, it's stealing in every sense of the word from us and so yeah we take real exception to it," says Beasley.

Beasley says he believes it's not being distributed through anyone at the Evening News, the papers being thrown out with the flyers on them are actually old papers that are believed to be taken in bulk, the flyers are then added.

Beasley attempted to contact the person listed on the flyers out of Harrison, Arkansas but was unable to reach anyone.

Ada police are asking anyone with information or who may have seen a suspicious vehicle to contact them.