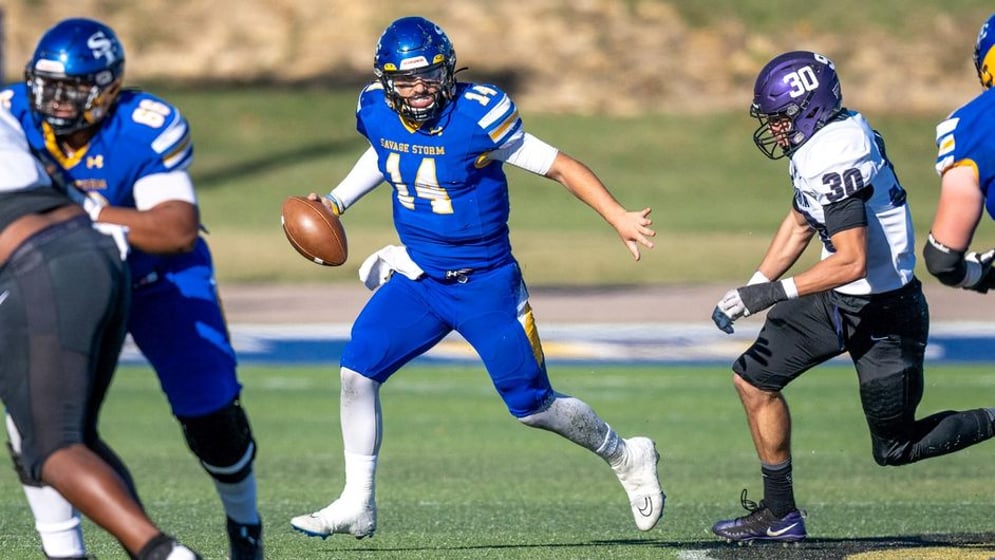 DURANT, Okla. – Southeastern jumped out to a 10-0 lead and trailed 19-18 at the half, but No. 3/4 Ouachita Baptist would score 21 unanswered points in the second half to spoil senior day for the Savage Storm with a 40-18 loss on Saturday afternoon at Paul Laird Field.

The loss drops the Savage Storm to 6-4 on the season with a season-ending date with rival East Central slated for Nov. 12 in Ada, Okla., at 2 p.m.

Daulton Hatley would put together his sixth 300-yard passing effort of the season, finishing 20-of-25 with a pair of touchdowns. The two touchdowns give him the single season passing touchdown record, lifting him to 28 and surpassing his own mark from a season ago, as well as moving him to the top of the passing touchdowns list, passing Drew Beard and giving him 67 career touchdown tosses. He also brings his career passing yardage total to 7,778 which leaves him just 191 yards shy of the career passing yardage record of 7,969 currently held by Jeff Moser.

He was not the only SE player making marks in the record book as Marquis Gray finished the day with 170 yards receiving and a pair of touchdowns, extending his single-season touchdown record to 15 and moving him into the top spot for yards in a single season, passing Romar Crenshaw's record of 1,158 and pushing his season total to 1,266 yards.

Kaleb Whitley would add three catches for 57 yards, with Braxton Kincade and Katrell Blakely each hauling in three grabs as well, going for 25 and 20 yards, respectively.

On the ground, Ryan Hirt finished as the team's leading rusher with 31 yards on three carries, while Jason Ngwu added 14 on 10 totes.

Trey Keatts would connect on a 29-yard field goal to highlight the special teams.

Cameron Tate led the defense with 10 tackles that included a sack and two tackles for loss as well as a forced fumble and two QB hurries.

Keelan Chilton was next in line with nine and a pass breakup, while Alexce Marshall added eight tackles.

SE would jump out in front first and in a hurry, using just two plays on its game-opening drive, the first a 61-yard Hatley to Gray connection and the second a 14-yard repeat of Hatley-to-Gray for the touchdown and a 7-0 lead less than a minute in.

Ja'Lon Freeman would pick off a Riley Harms pass on the second play of the ensuing drive and the Storm would cap that drive with a 29-yard Keatts field goal for a 10-0 lead which would hold up as the score after one quarter.

OBU would cut into the Storm lead with a field goal to open the second quarter, and SE would fumble the ensuing kickoff return which set up the Tigers at the SE 30 yardline and they would cash in with a Harms to Connor Flannigan 10-yard touchdown pass to tie the game at 10-10 with 11:24 to go in the second quarter.

OBU would tack on a field goal to take a 13-10 lead, but the Storm answered right back on another two-play drive that reached the endzone on a 48-yard Hatley to Gray connection and following a Hatley rush for a two-point conversion, SE would regain the lead at 18-13 with 3:07 to play in the half.

The Tigers would answer with a nine-play, 75-yard drive that lasted 2:33 and saw OBU score on a TJ Cole two-yard run with 34 seconds to go in the half, giving them a 19-18 lead at the half.

OBU would score twice in the third quarter, and would cap a 9:53 drive in the fourth that spanned 15 plays, pushing the Tiger lead to 40-18 which would hold as the final margin.