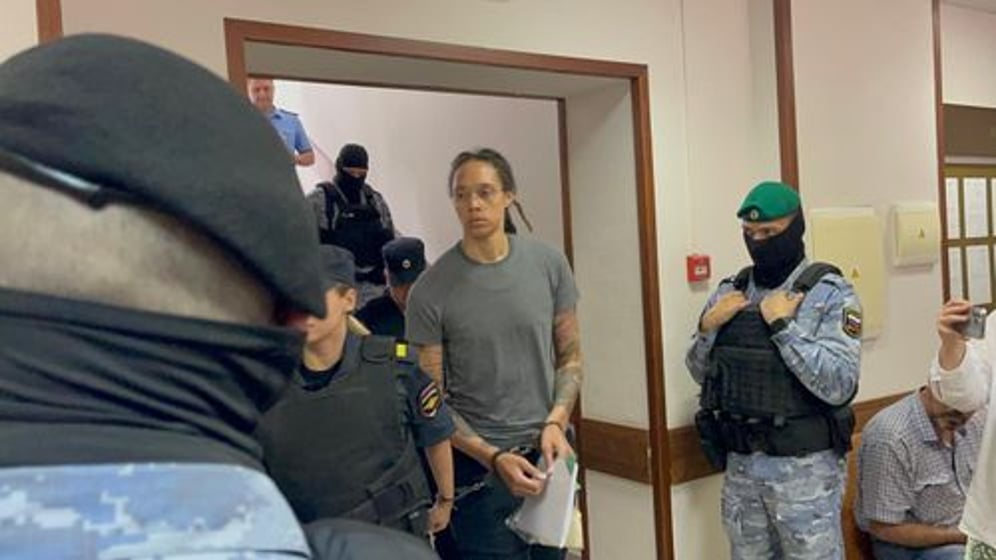 American women's basketball star Brittney Griner was convicted of deliberately smuggling drugs into Russia and sentenced to nine years of jail time Thursday in a case that has raised concerns she is being used as a political pawn in Russia's war against Ukraine.

Judge Anna Sotnikova of the Khimki city court delivered the sentence and fined Griner 1 million rubles, or about $16,400. She said the court took into account Griner's partial admission of guilt, remorse for the deed, state of health and charitable activities. Prosecutors had asked that she be sentenced to 9.5 years in jail.

Prior to the verdict, Griner apologized to the court and asked for leniency in an emotional speech.

"I want to say again that I had no intent on breaking any Russian laws. I had no intent. I did not conspire or plan to commit this crime," she added.

After the sentence, Griner told a CNN producer as she left court, "I love my family."

The verdict comes about six months after the 31-year-old was arrested at a Moscow airport and accused by Russian prosecutors of trying to smuggle less than 1 gram of cannabis oil in her luggage. The two-time US Olympic basketball gold medalist pleaded guilty to drug charges last month and said she accidentally packed the drugs while in a hurry.

Griner's lawyers, Maria Blagovolina and Alexander Boykov, said in a written statement they will appeal the decision and criticized the court for ignoring their evidence. They have 10 days to appeal.

"We are very disappointed by the verdict. As legal professionals, we believe that the court should be fair to everyone regardless of nationality. The court completely ignored all the evidence of the defense, and most importantly, the guilty plea," they said in the statement. "This contradicts the existing legal practice. Taking into account the amount of the substance (not to mention the defects of the expertise) and the plea, the verdict is absolutely unreasonable. We will certainly file an appeal."

Speaking outside court, Boykov said that the average time in jail for this type of crime is five years, adding that almost a third of those convicted get parole.

Griner "is not doing fine today," said Blagovolina, a partner at Rybalkin, Gortsunyan, Dyakin and Partners law firm. The defense team is hopeful that Griner will be able to talk to her family next week. Blagovolina added that Griner will return to the detention center where she is being held.

The harsh sentence comes amid the backdrop of Russia's invasion of Ukraine and the country's saber-rattling with the US and Europe. The US State Department maintains Griner is wrongfully detained, and US officials have offered a potential prisoner swap with Russia in an attempt to bring her home safely.

Charge d'Affaires of the US Embassy in Russia, Elizabeth Rood, said the sentence was a "miscarriage of justice," and US President Joe Biden said the lengthy sentence was "unacceptable."

"Today, American citizen Brittney Griner received a prison sentence that is one more reminder of what the world already knew: Russia is wrongfully detaining Brittney. It's unacceptable, and I call on Russia to release her immediately so she can be with her wife, loved ones, friends, and teammates," Biden said in a statement.

Secretary of State Antony Blinken criticized the Russian legal system more broadly, saying the sentence "puts a spotlight on our significant concerns with Russia's legal system and the Russian government's use of wrongful detentions to advance its own agenda, using individuals as political pawns."

He said the US is working to bring home Griner and Paul Whelan, an American citizen who has been held by Russia for alleged espionage since 2018. "This is an absolute priority of mine and the Department's," Blinken said.

It's now "up to the Russian side" on whether Griner's conviction opens new doors for negotiations of a prisoner swap, National Security Council spokesperson John Kirby said.

"We're still open to having our proposal seriously and positively considered, and if on the Russian side that means they feel like they're more empowered to do that, then so be it," Kirby told reporters in Thursday's White House briefing.

Kirby reiterated the US position remains that it wants Russia to "take the deal on the table because it's a good one, it's a fair one, and it'll help bring Paul and Brittney home."

CNN National Security Analyst Steve Hall said the harsh sentence was not a surprise and argued that Russia's court proceedings are not legitimate.

"This is all performance in Russia. There was never any doubt as to what was going to happen," he said. "What Vladimir Putin is trying to do is basically drive up the bargaining price of Ms. Griner."

Last week, CNN reported that the Biden administration proposed a prisoner swap with Russia, offering to release a convicted Russian arms trafficker, Viktor Bout, in exchange for Griner and Whelan. Russian officials countered the US offer, multiple sources familiar with the discussions have said, but US officials did not accept the request as a legitimate counteroffer.

The Kremlin warned Tuesday that US "megaphone diplomacy" will not help negotiations for a prisoner exchange involving Griner. Kremlin spokesperson Dmitry Peskov said Moscow believes these talks should be "discrete."

Griner's WNBA team, the Phoenix Mercury, played the Connecticut Sun on Thursday night. Before the game, the teams held a 42-second moment of silence as players linked arms. Near the end of the tribute, spectators started chanting, "Bring her home! Bring her home!" Griner, a six-time WNBA all-star, wears No. 42 for the Mercury.

The Mercury lost 77-64. Point guard Skylar Diggins-Smith, wearing a "We Are BG" T-shirt, said after the game the verdict was devastating.

"Nobody wanted to even play today," she told reporters. "How are you supposed to approach the game, approach the court and with a clear mind, and our whole group is crying before the game? Because you try to honor her and you try to come out and still play hard for her."

Earlier, the Mercury released a statement calling the verdict "a sobering milestone in the 168-day nightmare" of her detention.

"We are inspired every day by BG's strength and we are steadfastly committed to keeping her top-of-mind publicly until she is safely back on American soil. We will not allow her to be forgotten. We are BG," the statement reads.

"It's just heartbreaking," the coach said. "To hear her words and her apologies. Just trying to send love, prayers and strength to her."

In a joint statement, WNBA Commissioner Cathy Engelbert and NBA Commissioner Adam Silver criticized the verdict and sentence as "unjustified and unfortunate, but not unexpected."

"The WNBA and NBA's commitment to her safe return has not wavered and it is our hope that we are near the end of this process of finally bringing BG home to the United States," they said.

The court hearing Thursday began shortly after Griner arrived in handcuffs, escorted by Russian officers into the defendant's cage. Once uncuffed, she spoke with her legal team and then held up a photo of the UMMC Ekaterinburg basketball team, the Russian squad she played for during the WNBA offseason.

In closing arguments, Blagovolina argued that Griner never used marijuana in Russia and that she never had the intention of doing so. She had no need to bring the vape cartridges to Russia, the lawyer added. All this confirms the complete absence of intent in her actions, Blagovolina argued.

Even if Griner ever used medical marijuana, it was only at home back in Arizona, rare and only with a doctor's prescription, she added. She couldn't have known how strict the laws were in Russia, Blagovolina said.

Boykov also argued Griner had no opportunity to properly examine the court documents. He said that the Russian constitution guarantees everyone the right to use their native language and the free choice of the language of communication.

Boykov cited an instance when a language interpreter provided to Griner flipped through a lengthy document offered by an investigator for translation and then told Griner, "Basically, it means that you are guilty."

Throughout the trial, Griner's attorneys have laid out arguments undermining the prosecution's case and claiming her detention was not handled correctly after she was stopped February 17 by personnel at the Sheremetyevo International Airport.

Her detention, search and arrest were "improper," Boykov said last week, noting more details would be revealed during closing arguments.

After she was stopped in the airport, Griner was made to sign documents that she did not fully understand, she testified. At first, she said, she was using Google translate on her phone but was later moved to another room where her phone was taken and she was made to sign more documents.

No lawyer was present, Griner testified, and her rights were not explained to her. Those rights would include access to an attorney once she was detained and the right to know what she was suspected of. Under Russian law, she should have been informed of her rights within three hours of her arrest.

On Tuesday, at the seventh hearing in her case, a defense expert testified that the examination of the substance contained in Griner's vape cartridges did not comply with Russian law. Blagovolina also told CNN her team's experts identified "a few defects" in the machines used to measure the substance.

At trial, Griner testified she has a doctor's prescription for medical cannabis and had no intention of bringing the drug into Russia. Following her detention in February, she was tested for drugs and was clean, her lawyers previously said.

"We continue to insist that, by indiscretion, in a hurry, she packed her suitcase and did not pay attention to the fact that substances allowed for use in the United States ended up in this suitcase and arrived in the Russian Federation," Boykov, of Moscow Legal Center, has said.